The festival started in 2010 with two stages, the main stage Helviti and secondary stage Hades. The Upcoming Stage was introduced in 2011 for unsigned bands and was renamed Pandæmonium in 2012. 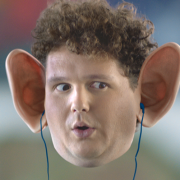